Shopping Cart Price Rules: How to stop all other coupon codes from being applied to a rule that has no coupon code

Basically I have a coupon called 2Love which we used for V-day. It has stop further rule processing set to "yes", but there's no actual coupon code for it. It applies directly to the cart if there is a combination of sku's.

Now in the second picture i have a rule with a specific coupon code. It is also set to stop further rule processing. The problem is you can still enter the "welcomeback25" code if the 2LOVE is already being applied. 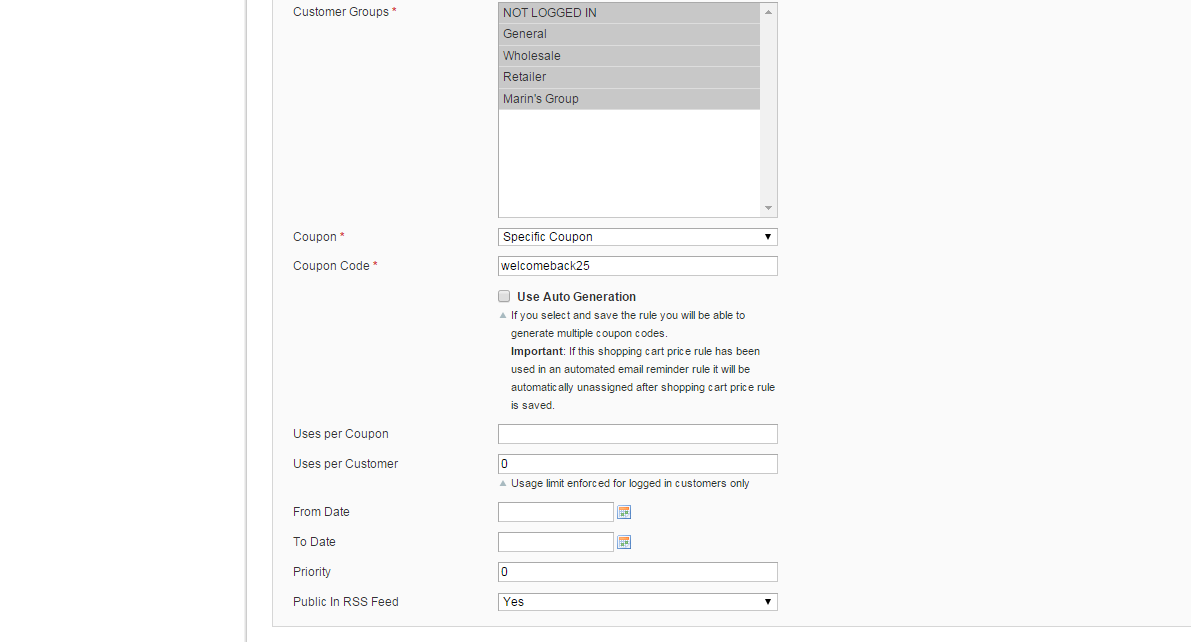 Perhaps it's because it's only on the right and not on the left under apply coupon.. it doesn't recognize it?

A rule that actually has a coupon code will show on both sides like the last image.

Any ideas how i can stop all other rules/coupon codes from being applied to a rule that doesn't have a coupon code.. rather just a name/label?

I'm reasonably sure this is going to be down to priority. Assuming the rule with the coupon doesn't also have 'stop further processing' if it was processed first then having both allowed would be my expected behaviour. Try giving the one with the coupon a priority of 10 (I think lowest number is highest priority). This way the 2Love should be processed first and prevent the other rule running.

How to delete expired coupon codes IN a shopping cart price rule? (DB Table salesrule_coupon)
I use a script generating a unique coupon code in a specific shopping cart price rule when someone signs up for a newsletter. I would now like to delete expired coupons codes in that rule and not the rule it self. The only script I found here is deleting the whole rule. How can I use MAGE:: to delete expired entries generated by the script below? T...
PHP Magento Magento 1.9
How to check if the current shopping cart has met the conditions of a specific Shopping Cart Price Rule
I have a specific shopping cart rule that checks weather 3 items or greater of products from certain categories have been added to the cart, and then gives a discount on a specific Item ( I will call it "Y" in this case). Magento will only apply the discount on Item Y if it has been added to the cart. What I am trying to do is display the option to...
Magento 1.x Cart Price
1.9.0.1 shopping cart rules using stop further rule processing
Would someone please share his knowledge in setting up discount: Tried like 1000x combinations, but I cant get it to work as expected, so pls tell me if it is possible or not: Now when all comes together I need the following: Any suggestions? :) Thx in forward
Discount
Shopping cart rule actions to stop sale items being discounted
I have a coupon code currently set that applies 10% off an order. I would like to be able to set the actions so that the items i have in the sale category will not be allowed to be applied at checkout. Currently the rule allows the coupon to be applied to both sale and non sale items. I ultimately would like a customer to only be able to get the 10...
Shopping Cart Price Rules Promotions
Magento admin panel: Promotions > Shopping Cart Price Rules (Percentage off whole cart) Using coupon code
I'm running 1.14 and you'd think by now they would have developed something for this percentage off the whole cart. There is "fixed amount discount for whole cart". Am i missing something or is there really no option for "percent of whole cart price discount". Any help would be greatly appreciated. Thank you.
Price Shopping Cart Price Rules Promotions
How can i give condition Shopping Cart Price Rules like if selected attribute products present in the cart, no other products allowed to add cart
If the customer selects my custom attribute products like "XYZ" to cart, after the customer not able to add other products to cart, the message showed "XYZ" attribute products present in the cart. and also other attributes products present in the cart, not able to add my "XYZ" attributes products to cart. How can I do it by using Shopping Cart Pric...
Magento 1.x Attributes Shopping Cart Price Rules